Lucky number 7! YuShi is on a roll and back with another recap. Dating in the Kitchen episode 7!

Episode 7 opens with Gu Sheng Nan trudging up the stairs in her apartment building. It is dark and she slips on a banana peel.

She ends up really hurting herself.

In the next scene she lies in bed with a brace on her ankle and neck, her two best friends teasing her.

Xu Zhaodi and Gao Quan An say that all of Lu Jin’s previous bad luck transferred to her because she took a kiss from him. Wasn’t he the one always getting hurt before?

Gu Sheng Nan protests, “The kiss was an accident.” But Xu Zhaodi confirms, it was definitely the stolen kiss that caused the bad luck.

Walnuts on the brain

In another city, Lu Jin finishes the interview for a hotel manager.

Lu Jin looks in his suitcase which is full of instant noodle supplies. Then he sees the honey coated walnuts Gu Sheng Nan made for him.

He remembers, favorably, how cheery she was while giving them to him.

Then he lightly hits himself on the head with the jar. He does this repeatedly.

It seems he is trying to forget Gu Sheng Nan, but can’t.

Person from the past

Back at Yard Fry Diner, Xu Zhaodi is telling Gu Sheng Nan to take it easy. Gu Sheng Nan should be out and about yet. Xu Zhaodi takes off to go do work.

Grandpa walks into Gu Sheng Nan’s view and tells her there is a visitor. He presents Gu Sheng Nan with a person from her childhood. 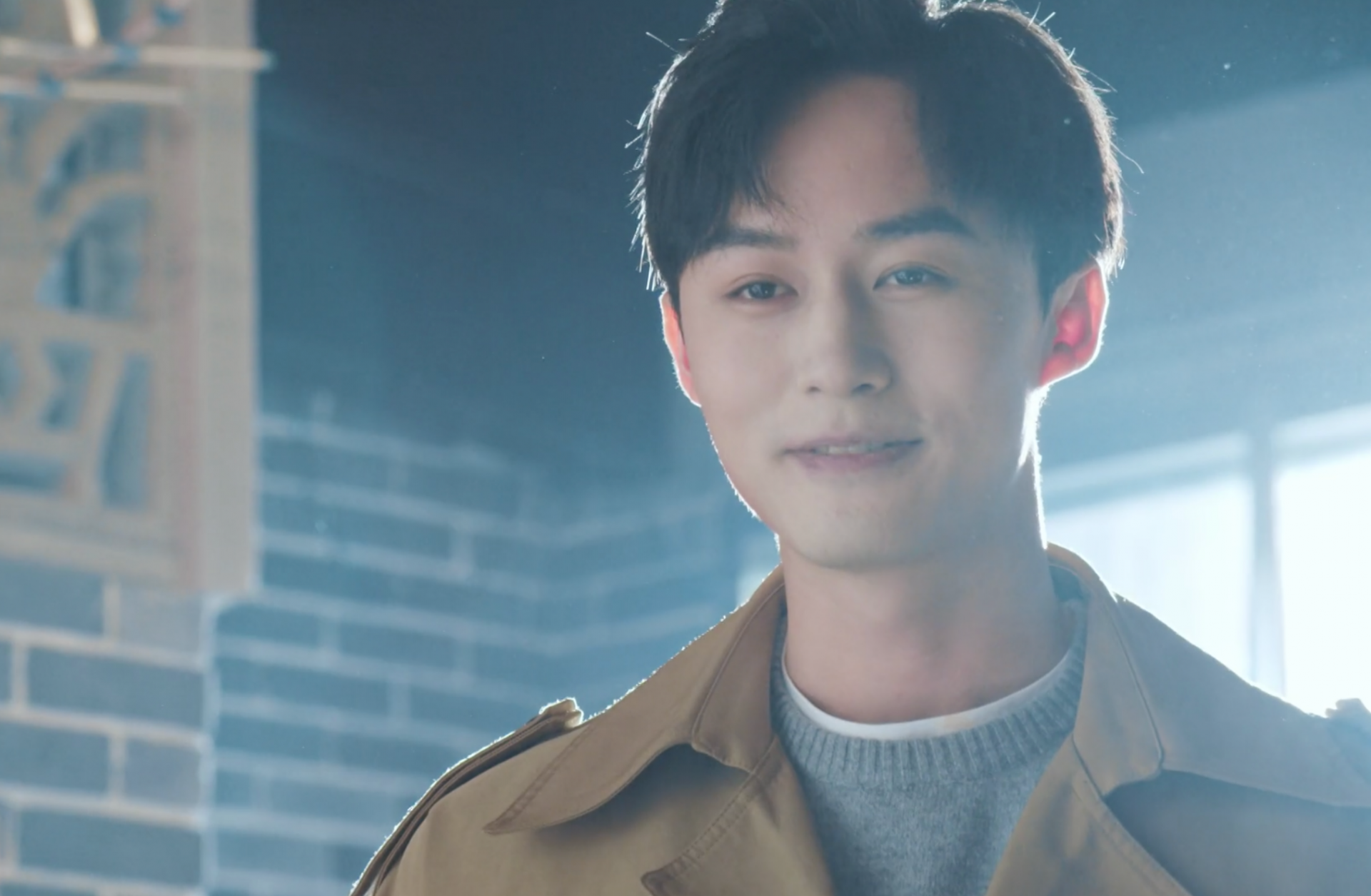 Gu Sheng Nan stares at him like he is a dream.

The scene flashes back to when Gu Sheng Nan was younger. She was scolded by her Grandfather and wanted to run away from home.

On her way out the door, she bumps into a boy who looks about 4 to 6 years older than her. They are friends.

He comforts Gu Sheng Nan and tells her to come over to his house.

At his house they eat dinner and Gu Sheng Nan has cheered up.

Back in the present, we see the boy from the flashback is the one standing in front of Gu Sheng Nan now. He is all grown up and quite handsome.

For now we only know him as Brother Ziqian. 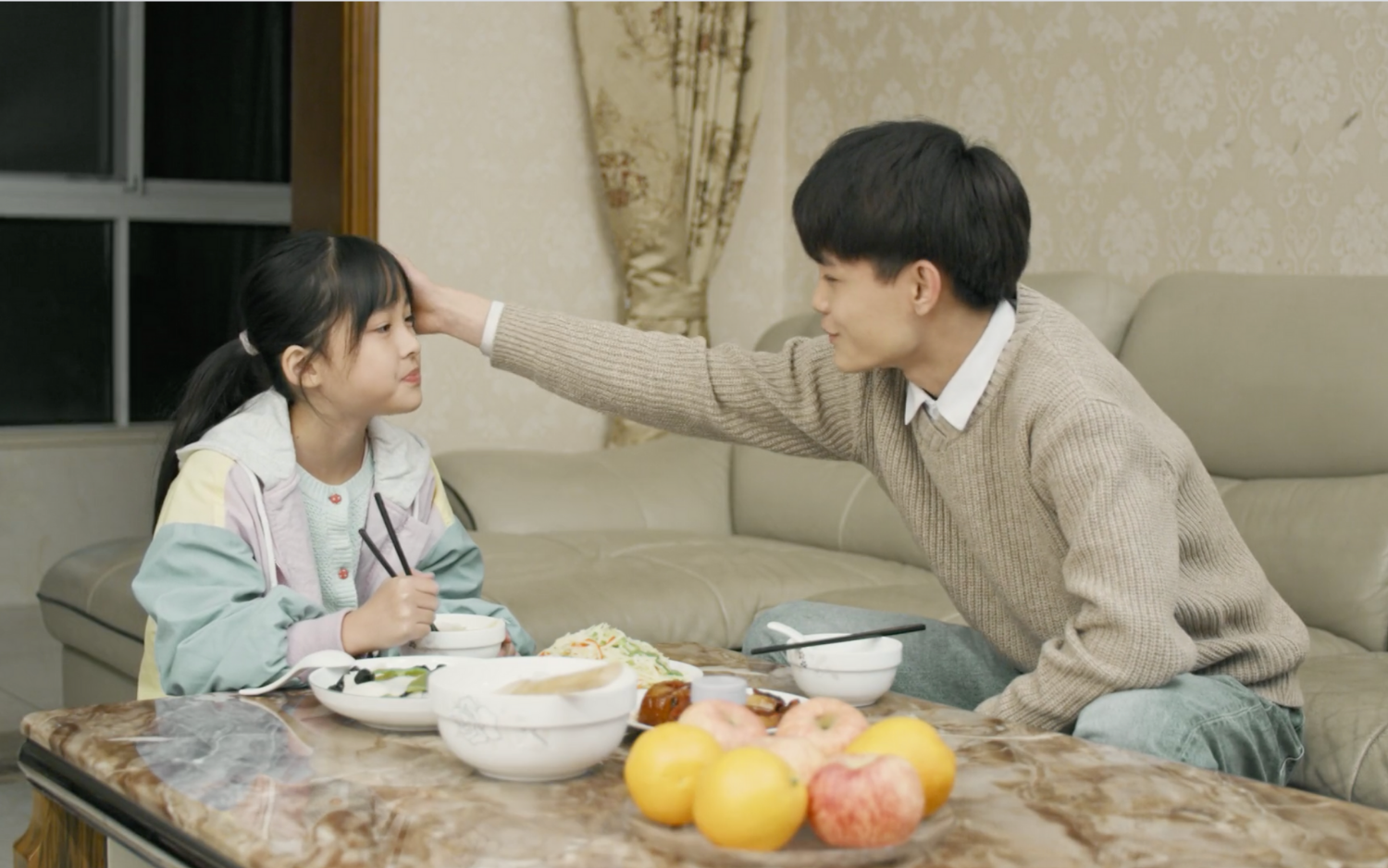 Meng Xin Jie, giddy from chatting with Xu Zhaodi. He tries to tell his order to the female waitress while still talking on the phone.

Because he is distracted, he ends up saying something strange and slightly harassing to the waitress.

The scene ends with a big guy in the kitchen angry at Meng Xin Jie about what he said to the waitress.

In the next scene Lu in and Meng Xin Jie are sitting across from each other at the hotel. Meng Xin Jie has a black eye.

Lu Jin inquires about what happened. He keeps the conversation going by asking Meng Xin Jie who he was talking to on the phone when it happened.

When Lu Jin learns Meng Xin Jie was talking with Xu Zhaodi, he wants to know if there is any news about Gu Shengnan.

Lu Jin is immediately worried and tries to schedule a flight back to Suhai, but the weather is too bad.

It’s dark when Lu Jin goes to the train station, but the trains aren’t running either. He ends up hiring a Taxi to drive 10 hours to Suhai.

Lu Jin does not enjoy the riding with the other passengers the cab driver picks up.

Meanwhile Gu Sheng Nan goes with Brother Ziqian in the evening to get coffee. They have fun chatting about what they have been up to over the years they have been apart.

Lu Jin continues to dislike riding with the other passengers the cab driver picks up.

Brother Ziqian accompanies Gu Sheng Nan home. He offers to escort her all the way up the stairs.

He makes plans to take Gu Sheng Nan to the hospital the next day so Gu Sheng Nan can have her ankle rechecked.

A new passenger is picked up by the cab driver.

She starts to talk about life. Specifically about her husband who was poor when they met.

The auntie passenger tells Lu Jin that because her husband was poor, he learned to knit and knitted her a sweater. She said it was her favorite.

Then the auntie assumes Lu Jin is taking a taxi back to Suhai because he had a fight with his wife.

And she tells Lu Jin not to fight with the person he loves.

The auntie encourages Lu Jin to be nice to the person he loves. If he is nice to her she will be nice to him. Lu Jin starts thinking about Gu Sheng Nan.

When the passenger leaves, Lu Jin tells her that her sweater is pretty.

In the morning, Lu Jin finally arrives on the outskirts of Suhai. The taxi driver informs Lu Jin that he can’t take him any farther. The taxi’s licence plates aren’t legal in Suhai.

The taxi driver has arranged for someone else to help Lu Jin on his journey. The new driver that shows up is driving a motorcycle/cart vehicle. Lu Jin is totally speechless.

Back from the check up

Brother Ziqian helps Gu Sheng Nan up the stairs to her apartment then leaves.

Lu Jin appears on the stairs after Brother Ziqian heads down the stairs.

How does he know his name?

Gu Sheng Nan argues with Lu Jin. Why is he at her apartment? Why does he care about who she is with? After all, the debt was paid and they don’t have a working relationship anymore.

What is going on in Gu Sheng Nan’s life is none of his business.

Lu Jin gets frustrated and admits he doesn’t even know why he is there.

Like a magnet he reaches across and cups Gu Sheng Nan’s face. He draws them together and kisses her.

Gu Sheng Nan pushes him away and exclaims, “Are you crazy?”

Wondering who is whom? Check out this Character Page! (WIP)

Things are getting more complicated! The introduction of a new character is sure to mix things up.

What do you think of Cheng Ziqian so far?

When Gu Sheng Nan yelled at Lu Jin in front of her apartment I had mixed feelings.

Did I feel bad for him because he got scolded?

Or did it serve him right for leaving Gu Sheng Nan in the first place?

What do you think? Let me know in the comments below!

Have something to say?

Head over to the chat!

If you’ve watched as much historical cdrama as I have, you may have noticed that the characters typically wear some type of clothing that’s relatively easy to move in. Sometimes,…

You could also show support by white-listing this website and clicking on the ads once a day! Or by checking out this Drama Merch Store. Thank you!

This website uses cookies to improve your experience while you navigate through the website. Out of these, the cookies that are categorized as necessary are stored on your browser as they are essential for the working of basic functionalities of the website. We also use third-party cookies that help us analyze and understand how you use this website. These cookies will be stored in your browser only with your consent. You also have the option to opt-out of these cookies. But opting out of some of these cookies may affect your browsing experience.
Necessary Always Enabled
Necessary cookies are absolutely essential for the website to function properly. These cookies ensure basic functionalities and security features of the website, anonymously.
Functional
Functional cookies help to perform certain functionalities like sharing the content of the website on social media platforms, collect feedbacks, and other third-party features.
Performance
Performance cookies are used to understand and analyze the key performance indexes of the website which helps in delivering a better user experience for the visitors.
Analytics
Analytical cookies are used to understand how visitors interact with the website. These cookies help provide information on metrics the number of visitors, bounce rate, traffic source, etc.
Advertisement
Advertisement cookies are used to provide visitors with relevant ads and marketing campaigns. These cookies track visitors across websites and collect information to provide customized ads.
Others
Other uncategorized cookies are those that are being analyzed and have not been classified into a category as yet.
SAVE & ACCEPT
wpDiscuz
0
0
Would love your thoughts, please comment.x
()
x
| Reply
×